by goddesscouturenews / June 5, 2018 STYLE GUIDE, THE DESIGNER No Comments

ANA TORRES is considered as a designer of national and international renown in the preparation of wedding dresses, ceremonies and parties; his more than 30 years of professional career endorse it. The production of his collections is done in an artisan way in his atelier of Córdoba, which in turn has modern facilities equipped with the most advanced technology on the market and with highly qualified human capital. Link into her world here -Link into this her style world here at https://www.anatorres.es/

She also presents her designs on the most important fashion bridal fashion shows: Gaudí Novias and Puerta de Europa Fashion Show, and this year, Ana Torres has been the designer chosen for the opening of the first Cibeles Madrid Novias catwalk, where she has obtained a resounding success with its collection. The strong expansive tendency in regards to exports is the reason why Ana Torres garments are not only sold throughout Spain through their own specialized boutiques or multi-brand boutiques, but also can be purchased in several Member States of the Union European countries such as France, Portugal, Italy, Germany, Greece, etc., countries of the Middle East (Kuwait, United Arab Emirates), Japan, North America and South America.

The collection of Ana Torres is directed to the current woman; With its designs it is intended that women feel comfortable with an elegant and sophisticated style, always made with high quality fabrics: all this to make the woman stand out for her beauty and distinction.

Ana Torres also has a special concern for the role of women in society. Account of it is the work that is developing in Córdoba in the integration of the woman in the labor world, creating numerous jobs directed essentially to feminine personnel, that at the moment occupies a ninety percent of the group. 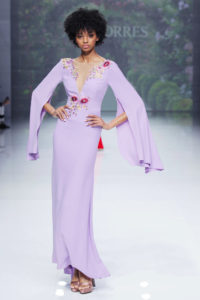