IYANLA: FIX MY LIFE SEASON PREMIERE On OWN September 19th

IYANLA: FIX MY LIFE SEASON PREMIERE On OWN September 19th. To all the Goddess Couture News followers, tune into a new season with Iyanla Vanzant.  It’s all about healing and revealing this season. Today, we have tons going on within our cities and society, it’s time to tune into OWN and check out a really great show that can be of support to you or a family members.

An all-new season of OWN’s award-winning self-help series, “Iyanla: Fix My Life,” begins with an emotional three-part, multi-week episode focusing on the coming out stories of two gay pastors. With the help of spiritual life coach, Iyanla Vanzant, both men take bold steps towards confessing their truth after years of keeping their sexuality a secret from those closest to them. “Iyanla: Fix My Life” returns on Saturday, September 19 at 9:00 p.m. ET/PT on OWN: Oprah Winfrey Network.

In eight one-hour new episodes of her popular OWN series, “Iyanla: Fix My Life,” Iyanla continues her work with those who are facing life’s most difficult struggles—guiding them toward a new way of living and encouraging them to do the work necessary for real change.

In this season’s groundbreaking three-part season premiere, Iyanla travels to Louisville, Kentucky to help two pastors whose true identities as gay men have been shrouded by years of lies, secrets and deception. The time has come for both to be true to themselves, while taking the very difficult step of coming out to those closest to them, including their families, a wife in denial and even an entire congregation.

Pastor Derek confides that he has spent years hiding his identity as a gay man. His family has shown open hostility toward gay people and he lives in fear of what would happen if his true identify was revealed to his family and his parishioners.  Iyanla works to help Derek understand that his pain will continue to devour him until he faces his greatest fears and helps him prepare him for the huge step of coming out to his family and church. Iyanla also helps Pastor Mitchell, who realized his same-sex attraction early, but buried those feelings after being told his desires were wrong.  Fear and guilt drove Mitchell into the church where he spent years preaching against homosexuality.  After marrying and fathering children, he began a string of affairs with other men—eventually telling his wife that he needed to embrace his gay identity, but never confessing his numerous infidelities. Iyanla’s real challenge is to help Mitchell understand that the only way to move forward and to undo the pain is to make a full confession and to live his life honestly from now on.

Later in the season, Iyanla meets a model who turned to excessive, dangerous industrial-grade silicone butt injections in the name of beauty, but at the expense of her health and relationships with others. Iyanla also works with two co-dependent sisters whose relationship is being destroyed by addiction; a grandmother who’s raising her grandson because of her daughter’s irresponsibility; and a family struggling with a three generation history of violence toward women, by women.

In an unforgettable season finale, Iyanla goes one-on-one with Olympic figure skater, Debi Thomas, to talk about her colossal fall from grace. Debi was the first African American to win a medal at the Winter Olympics and after achieving the heights of fame and success, is now broke, jobless and living in a crowded, bug-infested trailer with her boyfriend, who admits he drinks too much.

Iyanla Vanzant is the host and executive producer of Oprah Winfrey Network’s critically acclaimed and award-winning series “Iyanla, Fix My Life” and one of the most popular teachers on “Oprah’s Lifeclass.” She is a mother, survivor, spiritual life coach, empowerment orator, minister, two-time NAACP Image® Award winner and five-time New York Times best-selling author whose focus on faith, personal development and loving relationships has captivated and inspired audiences around the world. In addition, Iyanla is also a regular contributor to O, The Oprah Magazine and has been featured in numerous publications as well as on the cover of Essence magazine. A prolific writer, she has published sixteen books that have been translated into 23 languages and sold millions of copies. Her most recent book is “Forgiveness: 21 Days to Forgive Everyone for Everything.” When not writing or appearing on television, Iyanla lectures and facilitates workshops nationally and internationally. With her no-nonsense approach and underlying message of, “live better by loving yourself,” Iyanla has ignited a universal spark of self-discovery. 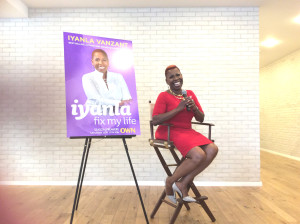